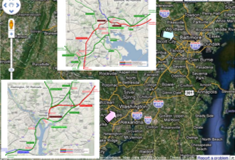 The efficiency and reliability of its freight transportation system greatly affect the economic competitiveness of the U.S. and the standard of living of its citizens. For instance, production systems have become increasingly dependent on “just-in-time” deliveries, which can reduce inventory and handling costs but depend critically on reliable deliveries. Efficient coordination of vehicle movements and freight transfers in transportation networks and at intermodal terminals, such as ports, airports and rail yards, can reduce the dwell time of vehicles and freight at the transfer terminals where various routes interconnect, such as ports, airports and rail yards, thereby also increasing the vehicles utilization rates, reducing the need for direct routes to connect many origins and destinations, and reducing storage requirements at terminals. Efficient coordination of vehicle arrivals can also improve the overall system efficiency through reduced handling costs (e.g., fewer handling stages, direct vehicle-to-vehicle transfers, and reduced transfer distances). The reliability of vehicle operations and goods deliveries can also be significantly improved by properly planning and controlling transfer operations at terminals. This proposed study seeks to develop a modeling framework and some specific component models for optimizing freight transportation systems, with emphasis on operations at transfer terminals. This framework should eventually be usable for designing and operating complex freight transportation systems as efficiently and reliably as possible, while dealing with various uncertainties and disruptions. The proposed framework will include six types of models for improving the efficiency and reliability of transfers in freight transportation systems: (1) Planning models for optimizing networks, facilities and equipment (e.g. origins and destinations served, those routes which are fixed, terminal locations and capacities, terminal processes and equipment, vehicle fleet characteristics) over long periods and under uncertainties; (2) Routing and scheduling models with optimized slack times, that coordinate the arrivals of vehicles at the terminals where they exchange freight; (3) Enroute control models for tracking vehicles and controlling their speeds and arrival times; (4) Terminal operation models for analyzing and optimizing the transfer processes inside terminals (e.g., vehicle loading and unloading, sorting, storage, inspections); (5) Dispatching models for determining when vehicles should be held or dispatched from terminals when some connecting are delayed (depending on such factors as the reliability of arrival predictions, delays to freight already on board and downstream, amounts and priorities of connecting freight, consequences of missed connections and delays to connecting vehicles at downstream terminals); and (6) Delay propagation models for analyzing the effects of planning, design and control decisions. Models of the above six types will be combined into an integrated freight logistics modeling framework which will be capable of dealing with the routine variability (i.e. small to moderate disruptions) experienced in logistic systems. It time and resources permit, this integrated set of models will be extended to deal with major disruptions (such as major storms, earthquakes or attacks) by taking advantage of analysis methods developed by members of our UTC team. Although it is strongly expected that the entire system of model will be developed within three to four years, the resources requested in this proposal should suffice to develop the general modeling framework and two of its model components. While the choice of those components may be influenced to some extent by the interests, experience and contributions of our partners from other universities in our National Center, at this time we propose to focus on dispatching models and delay propagation models.