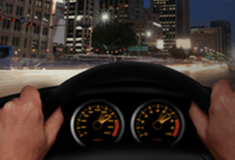 The primary goal of this study is to develop a driving simulator-based test bed for connected vehicles research in the areas of operation and safety. This includes testing real time data capture applications as well as integration and interoperability of connected vehicles and highway infrastructure.

To accomplish this goal, the following specific objectives or tasks will be achieved:

Task 1. The research team will search for studies, in published reports and journal manuscripts, with the purpose of gaining the state of the art knowledge on the subject matter. Target date for completion is end August, 2014

Task 2. The research team will develop a simplistic, yet realistic, network using the flexible scenario creation interface of the driving simulator. For instance, this may involve a simple two-route corridor from an origin to a destination. Target date for completion is end October, 2014.

Task 3. The research team will use the SimCreator proprietary software to: (i) manipulate the properties of the ambient traffic; (ii) create a new vehicle type to represent connected vehicles; and (iii) identify the traffic parameters that can be transmitted from the connected vehicles. Target date for completion is end March, 2015.

Task 4. The research team will explore the means to gather data from the connected vehicles in the ambient traffic, and synthesize information to be relayed to the driver of the driving simulator. The first part of this task, which relates to retrieving data, will address what information can be derived from the connected vehicles data. The second part, which relates to presentation of information, will involve producing a simple sketch of the graphical layout of the information that could be presented to the driver. Target date for completion is end June 2015.